I was on a mission to find a peony.  As I entered Blumen Dekker I learned peony season had come and gone. The owner, Jaap Dekker, ushered me to a bucket filled with roses in full blossom. With a discerning eye he plucked the flower that would best complement my cream colored layer cake, a rose whose petals matched the hue of his cheeks. 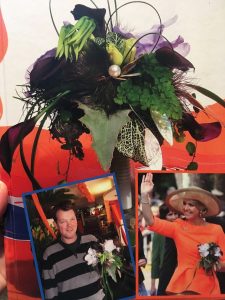 I’ve since learned Dekker was raised on the home soil of Rembrandt and windmills, which explains the orange sign over his door, along with his favored attire: vibrant tangerine sweaters and t-shirts.  For 15 years his artistry and knowledge have drawn locals, but his reputation extends beyond Wiesbaden.  Some of his most loyal customers are international flight attendants and Dutch Royalty.

On two occasions Dekker has been summoned to produce bouquets for the Queen of Holland while on official visits to Wiesbaden; Queen Beatrix in 2004 and Queen Máxima in 2013.

As proof, alongside the brass bell in the Marktkirche you will find a photograph taken of Queen Máxima carrying a Dekker bouquet. Her vibrant orange dress is a canvas allowing the bouquet to shine, as the whole attire becomes greater than the sum of its parts. The bouquet is understated, classic and elegant.

Regardless of your pedigree, Jaap Dekker and his stemmed companions are eager to turn moments big and small into something more, a memory worth remembering.

(Per their website, US military ID card holders receive a 10% discount.)